Obama has been in power long enough to show that Obama the President is not Obama the candidate. With the promised "change" coming in extremely small doses, Obama has now effectively squandered the enthusiasm that brought him to power. And the Democratic party will pay in the 2010 elections. This graph says it all: 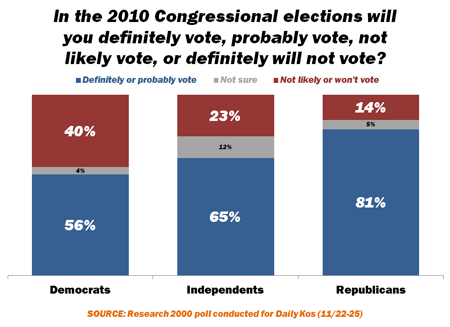 Progressives like me are getting increasingly disappointed with the Obama administration and the Democratic Congress and sadly, the graph indicates that our window of opportunity will close if we end up with a significant defeat in the upcoming elections. Can you imagine trying to advance the progressive agenda with more Republicans in Congress? I'm having trouble imagining doing that now, when we have absolute majorities everywhere.

Financial Markers and The Economy

As soon as Obama named his economic team it was clear we had to brace ourselves for "more of the same". The promised change would be delivered by the very same people that helped create the mess we're in. Remember the "Committee to Save the World"? These people presided over an era of rampant deregulation, creating the rules that lead to last year's meltdown. Frontline's recent "The Warning" episode details how these fundamentalists of deregulation fought tooth and nail to prevent regulation of Derivatives during the nineties. Summers is the current Director of the White House's National Economic Council. Matt Taibi's current article in Rolling Stone shows how the administration is full of people connected to Rubin, Geithner being the most prominent one. The article shows how Wall Street insider "experts" were placed in the positions of real power while the more progressive advisers of the campaign were marginalized. We even went out of our way to confirm Geithner after having found out he cheated on his taxes. And why? Because the person that had let the whole mess develop under his own nose as Chairman of the New York Fed was uniquely qualified to lead us out of the mess? Nonsense.

This group gave us the continued bailout with its outrageous aftermath of financial institutions returning to record profitability and record bonuses, while the tax payer guarantees gobs of toxic assets. The sense of urgency with which the bailout was decided, over a single weekend, says it all. Unlimited funds to bail out Wall Street: perfect. Funds for emergency mortgage relief for real people: not so much. It's socialism for the financial institutions and the ruthless free market for the real people.

Unemployment figures are unacceptably high and expected to remain so for a number of years. But sadly, the urgency with which we bailed out the financial institutions is nowhere to be seen. A weekend bailout for them, a "Jobs Summit" for the unemployed. Many economists noted that the stimulus was too low to start with and that we need another stimulus right now. Not the people in this administration.

And where's financial regulation? We bailed them out a year ago and no rules have been changed. What are they waiting for? The financial institutions are back on their old shenanigans, raking in the profits, with more wild abandon than ever before with the new certainty that the tax payer has their backs. I thought Obama was elected to fight for the people, not the fat cats in Wall Street.

Everybody knows the Clintons failed to pass Health Care Reform in their time. The lesson Obama seems to have learned from this: it was because they developed the plan themselves and Congress felt left out and sabotaged the whole thing. So, his choice from the get go: a hands off approach, letting Congress come up with the details with only minimal, if any, guidance from the White House. The result? A set of different, overly complicated bills from multiple sources. No coherent message to communicate to the people. Instead, the opposition had a wide open field to play the fear card based on any presumed feature of the upcoming bills. We had to endure the month of August, with the hysterical and frighteningly anti democratic demonstrations of the radical right. And finally, we ended up giving too much power to the pseudo Republicans also known as "Blue Dogs". A seeming disaster from any angle.

Maybe the right lesson to have learned instead was that the original bill was too complicated, hard to message and allowed the opposition to pick and choose multiple attack points. Obama had the power to propose something simple and clearly specify which aspects of his approach he would not compromise on. "Medicare for all!", for example. The Right would never go for it and would attack it from day one (just like they would attack any proposal!), but the other side would have known how to defend and debunk their preposterous accusations. But this is not how it played out.

Instead, we're getting a set of different, watered down bills that don't address cost control as effectively as they could. Yes: some of the provisions in the new laws are good, like preventing insurance companies from denying policies due to pre-existing conditions, no lifetime benefit limits, etc, etc, etc. But at the end of the day, the major reform we're now contemplating ends up maintaining the current dysfunctional system based on "for profit", private insurers whose main incentive is to deny coverage at all costs. We'll continue spending 30 cents out of every dollar in wasteful overhead for multiple, complicated administrative procedures. The insurance companies get to keep the "change" here, 30 cents out of every dollar.

I philosophically oppose the notion of any "for profit" outfit providing health insurance. My original naive expectations for the public option was that anyone would be able to sign up for Medicare and I was planning to switch out of the private insurers as soon as I could. But no: people with private, employer provided insurance don't get the option to choose the public plan, and there's now a possibility that states might be able to choose not to have a public option at all. Obama's major health care reform just provides 40 million new customers to the existing insurance companies.

Last week we had to watch the sad spectable of Obama addressing West Point cadets, in a scene right out of Starship Troopers, to finally unveil his approach to Afghanistan. It's 30,000 more troops, to be deployed now and to start pulling out in July of 2011, a definitive date, as long as conditions on the ground warrant withdrawal. So, we'll definitely withdraw... unless we can't in which case we won't. This is a cowardly choice that won't achieve anything. Does anyone believe we'll be able to "fix" Afghanistan in 18 months? Obama had two real choices here: ending the war and switching to an intelligence gathering and police approach, or really escalating the conflict, going in with a couple of hundred thousand more troops to really take control of the country. The first option would be attacked with the old cliche of "Democrats weak on foreign policy" and the second option is just not feasible without a draft. So, instead, we get the middle of the road option which sends more soldiers to die for a dubious and ineffective extension to the current conflict.

Again, we elected Obama for change, not for maintaining old Bush policies. The speech was incredibly depressing in its use of the same old Bush-style devices starting with mentions of 9-11, then Afghanistan as the place where it was planned, then talking about victory and so on. Jon Stewart summarized it brilliantly in the Daily Show. Warning: this clip is hard to watch (and then it becomes a bit silly):

I wanted Obama to have the guts to propose something different, to choose a different path, explain it to the American people and hold his ground. But no. It's more of the same old Bush policy. Very disappointing from the "anti war" candidate.

Obama is clearly intelligent, informed and armed with good intentions. During the campaign he appeared to be toning down his progressive ideas to be elected and while I was extremely uncomfortable with that approach, it worked and he got elected. Unfortunately his record in power so far demonstrates that he's not a progressive: he's a centrist, an extremely cautious, eager to compromise politician that's failing to excite his base. His inexplicable quest for bipartisan solutions, dealing with an opposition whose only goal is to derail every initiative of the administration without regards for the consequences to the real people of this country, is infuriating. Obama the centrist will not win the next presidential election, as long as the Republicans manage to field a half decent and sane candidate.

Rolling Stone Magazine's editorial, "Doubting Obama", sadly notes that Obama's credit has run out. After endorsing him during the primaries, a move they had never made before, they now sadly bow to the evidence that Obama is not what we hoped he would be. As Rolling Stone Magazine goes, so goes the nation? Hardly. Obama will soon find out what missing the progressive wing with its cadre of idealistic youngsters will do to his chances for re-election. Too bad the prize we'll pay for this "epiphany" will be loss of seats in both houses with the subsequent end of legislative progress.

We don't have to wait for the next election cycle to correct this course. Too bad about Afghanistan. The health care fight is on, and it's time for Obama to exert his influence to achieve the best possible bills, which most certainly won't have any Republican support anyway. He should fire the whole economic staff and find a new set of experts, and move right now to pass a new stimulus package. And the fight for Global Warming legislation is coming up. A course correction is needed now.
Labels: Afghanistan Congress elections Health Care Obama Politics progressive