This summer our two daughters, ages 10 and 12, went to summer camp somewhere in the East Coast. It's the second consecutive year that they go to this camp. The camp has a strict "no immediate contact" policy, to prevent kids from extreme homesickness and parents from freaking out and aborting the full, three week, camp experience.  So, no phone calls, no emails, no cell phones. The only mechanism of communication allowed is physical letters. The kids have off time during the day when they're encouraged to write home. Letters are mailed using normal postage and take about 5 days to get to us on the other side of the continent. As soon as the kids leave we start mailing letters from home, so that they start receiving them during the first week and we space them evenly to keep them in good spirits. They typically start writing after a couple of days which means it takes a while to start getting news from them. (The camp posts pictures on their website, which also take a few days to appear).

The first few letters from Clara, our 10 year old were pretty normal. She wanted mail from us. She told us about her activities and also that she had been sick during the first couple of days of camp, which we knew because camp staff had communicated with us about it. Then, somewhere around the end of week 2 on our end, we got this gem: 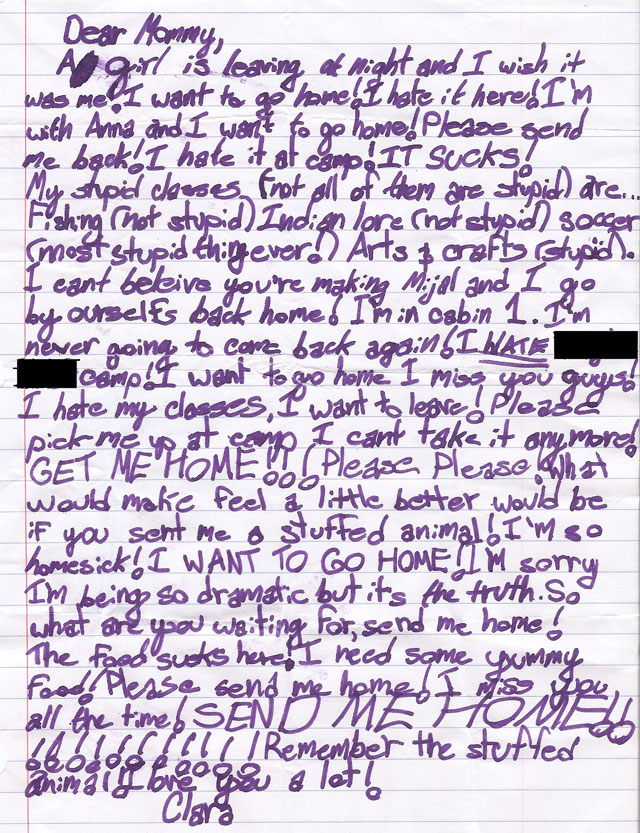 So, how is a parent thousands of miles away to react to an obvious cry for help (or stuffed animals) such as this one? In this age of immediate communication we are really no longer used to the time travel effect of physical mail. Obviously she was in some distress when she wrote this, but when was that? And how would she be feeling in the present? After taking a couple of deep breaths we carefully weighed the evidence:
So, we emailed the staff to verify that everything was OK and they responded quickly indicating that Clara was obviously having a great time, enjoying activities, seemed to be in good spirits, etc. So, we relaxed a bit. And soon enough we started getting more letters from her, of a totally different nature.

The girls flew back from the East Coast on their own and as we drove home they just talked excitedly about all the nice things they did at camp. And while Clara says she does not necessarily want to go again next year, on her first phone call to one of her friends she told her of this great summer camp that both of them should go to... when they're a bit older. (not stupid)
Labels: Clara physical mail stuffed animals summer camp