There was a time when you could count on your tax dollars to finance a world class, equitable public education system. But no longer. Consider the graph below: 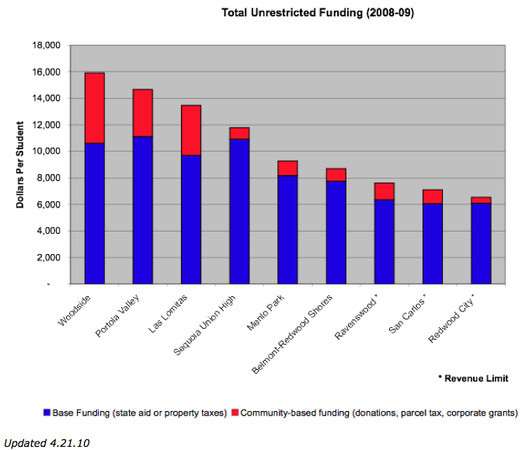 Focus on the far left and the far right. On the far left we have the Woodside School District, serving a small population of children in an area with very expensive houses. On the far right we see our very own Redwood City School District, serving a very large population of kids in an area that's mixed, containing some expensive houses but mostly middle class ones. The result? Due to the intricacies of school funding, our district receives the minimum funding guarantee from the State while the Woodside district exceeds that lower bound with its own property taxes and receives a much larger chunk (the blue section of the bars). In addition to that, the Woodside district raises much more money per child, a result of having fewer children and a more affluent parent community. The red section of the bar shows a combination of donations and parcel tax income.

Regardless of the funding details, the inequity inherent in the system is outright immoral. Is a child in Woodside worth twice as much as a child in Redwood City? Think about that for a few seconds...


So, what can we do? Ideally all districts in the State would enjoy similar levels of adequate funding, more like Woodside than Redwood City. Two options: try to raise the blue bar or the red bar. Raising the blue bar is virtually impossible without substantial reform in Sacramento, where the 2/3 Super Majority requirements result in a tyranny of the minority as described eloquently by James Madison in the Federalist Papers #22. A minority of Republicans is enough to block tax increases or any kind of meaningful reform. Attempts to change the 2/3 requirement, at least for passing local Parcel Tax initiatives have repeatedly failed. Sadly, we cannot wait for the State to act responsibly in defense of public education.

The next option is to try to raise the red portion of the bar. The good news is that we, local residents, fully control that bar. We can finally pass a parcel tax, but that's going to take a while and is no sure thing based on previous experience. What we can do right now which can make a real impact is realize that the days of public schools fully funded by our taxes is over. We need to start thinking of a constant stream of donations to our public schools.

Low income families don't have any choice: they are stuck with the public schools. If the public schools deteriorate, so will the chances of success of their kids. Upwards mobility, a key component of the American Dream, is no longer what it used to be.

People of higher income levels can react to the constant defunding of public education in two ways: by leaving the public education system altogether (opting for private schools) or by staying and fighting to restore proper funding levels. If you're devoted to the idea of public education and equal opportunity for all our kids, consider the cost of a good, secular private school. Most in the Bay Area are between 20 and 30 thousand dollars a year. So, here's my proposal, for your consideration:

If you voted for the Parcel Tax in the past, consider:


Your total "expense" for a full year of public education is $2000 (if you only contribute during the 10 months of school), a mere 1/10th of what you would pay to abandon the ideal of public education for all and move to a secular private school. And considering that our schools do wonders with the resources they have, this is an amazing bargain.

Donating to your PTA alone is not enough. The RCEF is the only organization that fund raises for all the schools in the district (the red section of the bar in the graph!). Since it speaks for all the children, it can attract larger donors and fund larger items than you can do alone within your school. RCEF pays for much of our music instruction, the Outdoor Ed program, and much, much more.

And if you don't have kids in the schools, and you voted for the Parcel Tax, please send a donation to the RCEF now, in lieu of that parcel tax payment you're not making.

It's hard to accept that public education is not "free", but we can't ignore reality. We can't expect magical solutions from the State and we can't sit idly by while the schools receive less and less funding and cut more and more programs.

For a great overview of where we stand, check out this Redwood City Patch article: Redwood City Still the Only District Without Additional Parcel Tax Funding.

Appendix 1: The Tyranny of the Minority


In Federalist Paper #22 James Madison, one of the Founding Fathers no less, writes the following incredible words (quote courtesy of "The Ruskin Report", August 2009):

To give a minority a negative upon the majority (which is always the case where more than a majority is requisite to a decision), is, in its tendency, to subject the sense of the greater number to that of the lesser... This is one of those refinements which, in practice, has an effect the reverse of what is expected from it in theory. The necessity of unanimity in public bodies, or of something approaching towards it, has been founded upon a supposition that it would contribute to security. But its real operation is to embarrass the administration [of government], to destroy the energy of the government... In those emergencies of a nation, in which the goodness or badness, the weakness or strength of its government, is of the greatest importance, there is commonly a necessity for action. The public business must, in some way or other, go forward. If a pertinacious minority can control the opinion of a majority, respecting the best mode of conducting it, the majority, in order that something may be done, must conform to the views of the minority; and thus the sense of the smaller number will overrule that of the greater, and give a tone to the national proceedings. Hence, tedious delays; continual negotiation and intrigue; contemptible compromises of the public good. And yet, in such a system, it is even happy when such compromises can take place: for upon some occasions things will not admit of accommodation; and then the measures of government must be injuriously suspended, or fatally defeated. It is often, by the impracticability of obtaining the concurrence of the necessary number of votes, kept in a state of inaction.

He must have been watching the California budget squabbles with his time machine. Prop 13, which imposed a 2/3 super majority requirement for passing local Parcel Taxes and much more, has resulted in exactly this paralysis.


Appendix 3: The Gap has Widened!

The chart at the top of this post is from 2008. Data for the 2009-2010 academic year shows that the gap has widened even further.
Labels: Education

The Mess that is Digital Music